Despite being a practical solution for reducing costs and emissions, longer and heavier vehicles (LHVs) often get a bad reputation as being unsafe or requiring heavy investments into infrastructure. But this couldn’t be further from the truth. Here is a look at some of the most frequently asked questions about high capacity transport to help debunk the myths.

LHVs (otherwise known as turnpike doubles, eco-combis, high capacity transport (HCT), road trains, super lorries or mega trucks) are trucks that are longer and heavier than the legal dimensions in a country. Below are some examples of typical LHV combinations.

LHVs are routinely used in Scandinavian countries, the Netherlands, Germany, Spain, as well as Australia, Brazil, Canada, South Africa, and the USA. The growing need for transport and stricter demands on the trucking industry to reduce emissions has put the spotlight on LHVs as a solution to both problems.

By consolidating cargo from many vehicles into one high capacity vehicle combination, LHVs can reduce carbon emissions and cost per unit of cargo transported. Just how much more efficient and environmentally-friendly a LHVs is depends on how it is specified and utilized. The flow and timing of freight and loads that could be consolidated is extremely important to see the full benefits of high capacity transport. So for operators running hub to hub, factory to hub or factory to factory transport, LHVs could be an excellent alternative.

There is enough research and real-life data out there to support the environmental benefits of LHVs. One study estimates that an individual LHV could reduce carbon emissions by 15-40%.  In a 2015 trial of LHVs in Germany, logistics companies reported a 33% reduction in their costs and a 70% drop in fuel consumption and CO2 emissions. Another study in the United Kingdom concluded that introducing super lorries could save £1.5-2 million in vehicle kms, up to £1.5 billion in transport costs and 0.72 MT in emissions.

There is also some positive effects on driver shortage; consolidating freight from many trucks to one allows haulage operators to run with less manpower and potentially use the improved margins to pay skilled drivers better salaries.

At Volvo Trucks we have seen all of the these gains in various trials of high capacity transport. Below is the results of a trial running between Gothenburg and Malmö transporting the same volume of goods both with regular trucks and LHVs. 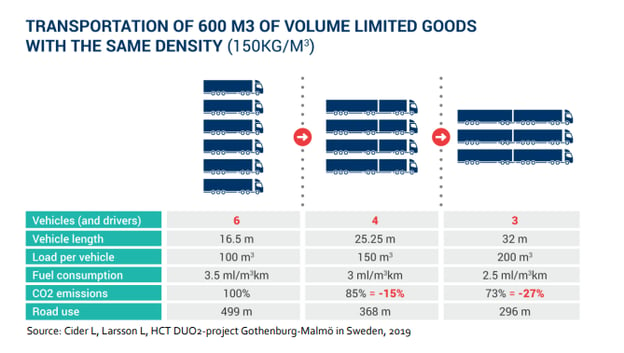 There is a perception that due to their size and weight, LHVs would be less safe than conventional trucks. But this is quite far from the truth. All research, data, tests and real-life operation of LHVs show that well-regulated high capacity vehicles can actually contribute to road safety by  taking vehicles off the road and reducing the number of kilometres traveled per truck. But the public’s fear about the safety means that in order to get wider acceptance, high capacity transport needs to put safety in focus. This could mean both legislative measures that restrict where and how fast LHVs can travel but also things like extra safety features and additional driver training.

What about road infrastructure?

Critics of high capacity transport often argue that LHVs will damage roads and that much investment will be needed to adapt existing infrastructure. This is partly true; while most roads are wide enough there could be a need to update some bridges, roundabouts, motorway entry and exits. But this will probably not be as extensive as critics fear. Regarding damage to infrastructure; while LHVs carry more weight, the load per axle is not more than a regular truck as this weight is distributed over more axles meaning that pavements are unlikely to be damaged.

Real world experience gives little support to the fear that high capacity transport could replace railways. In the Netherlands for instance the number of longer and heavier vehicles increased a lot between 2001 and 2016 and studies showed that the volumes LHVs took over came wholly from regular trucks, not rail and inland waterways. This is not that surprising since railways are already used at full capacity in most countries and they transport the type of goods, iron ore for instance, where trucks would not be a cost effective alternative.

Most railways also prioritize the transport of passengers over goods. In most instances railways and trucks also work together rather than against each other. For example agricultural products often travel by truck from farm coop centers to terminals for rail transport in trucks. If some of those trucks were replaced with longer and heavier vehicles, the trains would be able to transport a larger volume of goods and costs would be reduced throughout the transport chain.

How do you specify a LHV?

As with any truck, specifying a LHV depends on your operations, total weight and the topography of the road. For LHVs it’s important to consider if you will be driving fully loaded in both directions or empty/half-loaded one way as this will influence the choice of driven, steerable and lift-able axels. For most LHVs two driven axles is preferred to manage the weight and this can even go up to 3-4 axles for heavier loads. The choice of a driven axle is particularly important as is the ability to shift loads and lift axles for better maneuverability. Extra cameras, mirrors and any other safety features will also be necessary for better visibility when reversing or turning a tight corner.

Trailers are a really important part of the specifications and we at Volvo Trucks recommend that you buy trailers that match LHV transport needs rather than adapting existing ones. Trying to adapt old trailers with towing equipment, dolly and so forth can end up being a costly and cumbersome option.

How difficult is it to drive one?

Driving an LHV is not harder than driving a normal truck. But since reversing and maneuvering can be a bit tougher some extra driver training will definitely be needed.

What is the legislation concerning LHVs?

In Belgium 49 routes are approved for LHVs while in Portugal combinations of up to 60 tonnes and 25.25 meters is allowed for heavy haulage and timber transport. In the Netherlands and Denmark 25.25 meter and 60 tonne trucks can travel on most roads. Czech Republic and Estonia are  also testing the feasibility of longer and heavier vehicles.

Requirements regarding axles, weight limitations, turning circles and so on, differ from country to country in the EU, making it impossible for the same rig to comply with all regulations in every country. This is probably the biggest obstacle to the wider use of LHVs in Europe.

Outside of Europe the use of LHVs is relatively common. In Australia there are the behemoths of transport—road trains which are known to be the world’s longest trucks. They can be up to 53.5 meters long and weigh 220 tonnes on public roads. But there's nothing to limit the length of a truck train on private roads, like those owned by Australian mining companies.

In the US, turnpike doubles can operate on most interstate highways. But as in the EU, each state has its own limitations on dimensions and number of trailers. One exception is the forestry industry where most LHVs drive on private roads without the same restrictions.

In Brazil trucks weighing 57 tonnes and up to 19.8 meters are allowed on roads. And with a special permit this can go up to 57 to 74 tonnes and 30 meters. On private roads used for timber and agriculture transport, there can be five trailer combinations weighing a whopping 170 tonnes.

Are LHVs the future of transport?

LHVs are definitely a part of the future of transport thanks the role they can play in meeting our growing need for logistics and a lower carbon footprint. Just how quickly LHVs will become a bigger part of the transport mix depends on legislation and standards in each country. A unified cross-border legislation in places like the EU could allow LHVs to travel further and create an even better business case for them.

Another aspect that speaks in favor of the future of high capacity transport is the fact that it’s fuel independent; LHVs can be fueled by LNG, biofuel, hydrogen and even electricity for shorter distances.

As a haulage operator should I invest in one?

Absolutely—as long as you have long-term contracts with loyal customers to ensure a continuous flow of a high volume of goods to justify the upfront cost. A fully utilized LHV running over a period of time will not only allow you to carry more with less trucks and manpower but do so without significant increase in maintenance costs.

Höganäs AB is a major producer of iron and metal powders with an annual capacity of 415,000 tonnes. The company is based in the south of Sweden and serves 3,000 customers in 75 countries.

Transporting iron and metal powders is serious business. Höganäs, working with hauler GDL, was transporting on average 36 single 26-tonne containers each day from Höganäs to the port in Helsingborg which totaled to 9,000 transport operations per year. In order to reduce the number of trips, emissions and congestion in the cities where the trucks were travelling, Höganäs decided to try out LHVs. Working with Volvo Trucks, GDL and trailer-manufacturer Parator, the company tested a solution to transport two 26 tonne containers between Höganäs and Helsingborg using a special-built Volvo FH16 with 750hp and 9 axle link/B-double combination, weighing 74 tonnes.

The test showed good results and Höganäs has not looked back since. Today the company uses one LHV in their daily operations with great results including reduced costs, improved loading procedures and better safety with less number of vehicles in the city and harbor. Höganäs will soon expand with additional vehicles so the number of trips will be halved to 4,500 trips and emissions reduced by 35%. 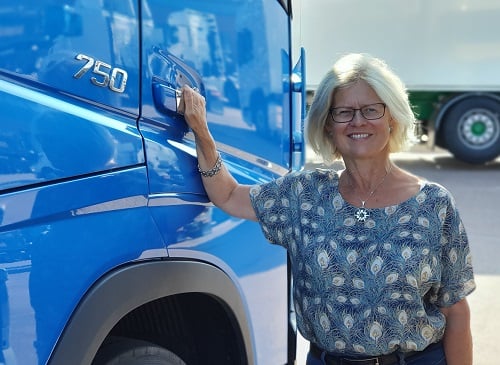 Are lightweight trucks right for your operations?

A lighter truck has many advantages, mainly higher payload and lower fuel consumption. However, the amount of weight …

How to secure financing for your next truck?

Starting out, truck financing can seem complicated, but it doesn’t need to be. Every trucking company faces a few key …

How do you go about incorporating sustainability into your operations?

How we work with sustainability in transport matters. The industry has a direct impact on a number of factors including …